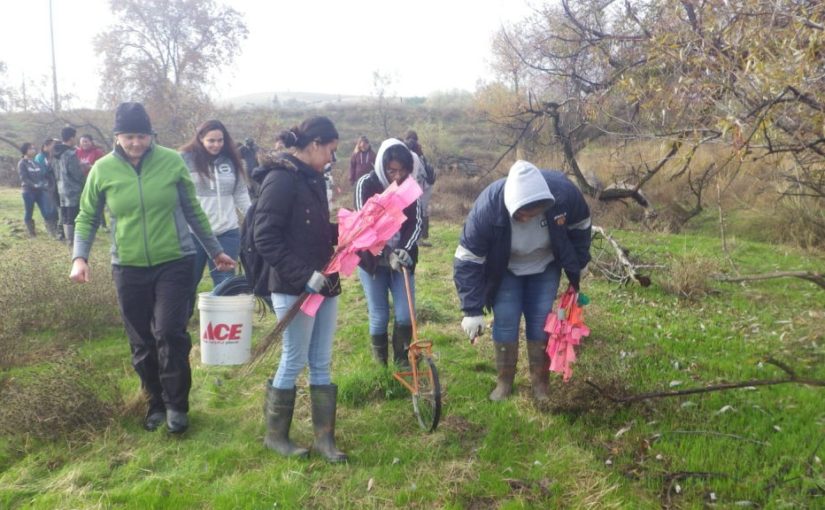 Summary of the Day
Yanci Ranch, a cattle ranch about 7 miles north of Winters, has hosted three SLEWS projects in the past – and this year, the project is large enough that we will have two schools adopting the site! Grant Union High kicked us off with the first field day, two years after their classmates completed a project on the same property.

A foggy morning obscured the beauty of the site, which includes a picturesque pond and views of the hills (though that made for a fun surprise when the fog cleared later that morning!). We began our day as we always do, in an opening circle. Landowner Bruce Rominger introduced the site to the students and Amy Williams of Yolo County Resource Conservation District shared the project details before we broke the ice with a game of group juggle.

After gathering our supplies and putting on mud boots, we walked down to the project site. Bruce had used a slip plow to pre-bury a line of irrigation, so our first steps would be to measure along the line and place flags every 10 feet. One mentor group tackled this, while the others followed and installed emitters and spaghetti line at each flag. This was harder than it sounds as the line was buried – to access the line, students had to first dig down to it! Grant Union student’s keen eyes noticed many signs of wildlife throughout the morning, from deer on the way in to millipedes, centipedes, and frogs along the planting area. We even found some cow bones – this is a cattle ranch, after all! After installing emitters (!), Bruce was kind enough to give students a demonstration of how the slip plow works. He showed students how the spool of irrigation tubing fits on the back, and as he drives the tractor, the line is buried under the soil.

One irrigation was complete, students plug planted sedges and rushes in an area susceptible to erosion. These plants will help alleviate this problem while also contributing to the quality of habitat.

After a well-deserved burrito lunch, students got a chance to talk with each mentor about their education and career paths. Since they will see these mentors at each field day, it was also a great opportunity to get more comfortable with our Yanci Ranch team!