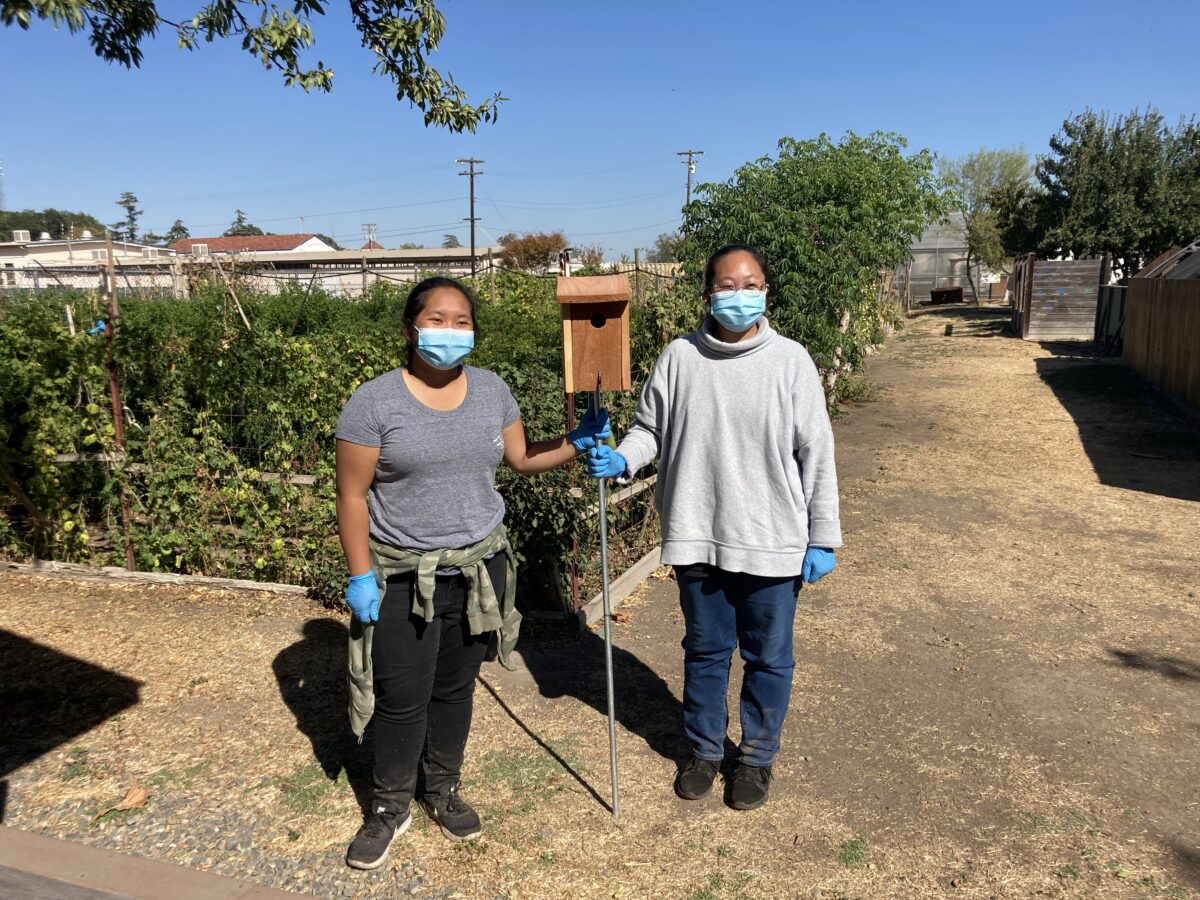 Summary of the Day
For our third and final field day on our restoration project in Grant Union High School’s campus, we were finally able to work with a nearly normal number of students! 22 students joined us for a field day in the GEO Academy Garden.

To begin the day, we circled up in the garden to play a round of Group Juggle to learn each other’s names and then reviewed our agenda for the day. Students grabbed rakes to do some maintenance on the native plant area SLEWS students planted in April. The nearby sycamore trees had littered their leaves all over the area, making it difficult for the plants to get enough sunlight. Once the leaves were removed and composted, we moved on to our next activity – building bird nest boxes!

Center for Land-Based Learning Ecologist Jeanne Wirka led a discussion about cavity-nesting birds and how bird nest boxes can provide critical breeding habitat for these species. Groups of students were each given a bird box “kit” – a drill, cut pieces of wood, and screws and other fasteners. I was so impressed at how eagerly and confidently students jumped into this activity! Students who had never used a drill before figured it out with ease, and built the boxes using only a model box as a guide.

Once all the boxes were complete, each group signed and decorated their box before learning how to install it in the GEO garden – at least 30 feet from other boxes, facing the north or east, and making sure to affix an upside down trash bin around the pole to prevent predators from climbing up. Each group chose their own spot for their box, and by the end students had installed 9 bird boxes in the GEO Garden! Come spring, these students will be able to watch as swallows and/or bluebirds make nests and raise young right outside their classroom door, and will monitor the boxes themselves, contributing data to the Cornell NestWatch program.

Once bird boxes were installed, Jeanne shared her education and career path with students. Many students asked Jeanne for advice and had very insightful questions for her. From there we moved to some flowering plants in the garden and observed many pollinators, including carpenter bees, hoverflies, skippers, honeybees, damselflies, and a fritillary butterfly!

We ended the day with burritos and a “favorite moment” from each student. I was impressed with the variety! Some students loved raking, others preferred building bird boxes, others enjoyed looking at pollinators, and others loved the burritos most of all! I think we can all agree, it was an excellent day. 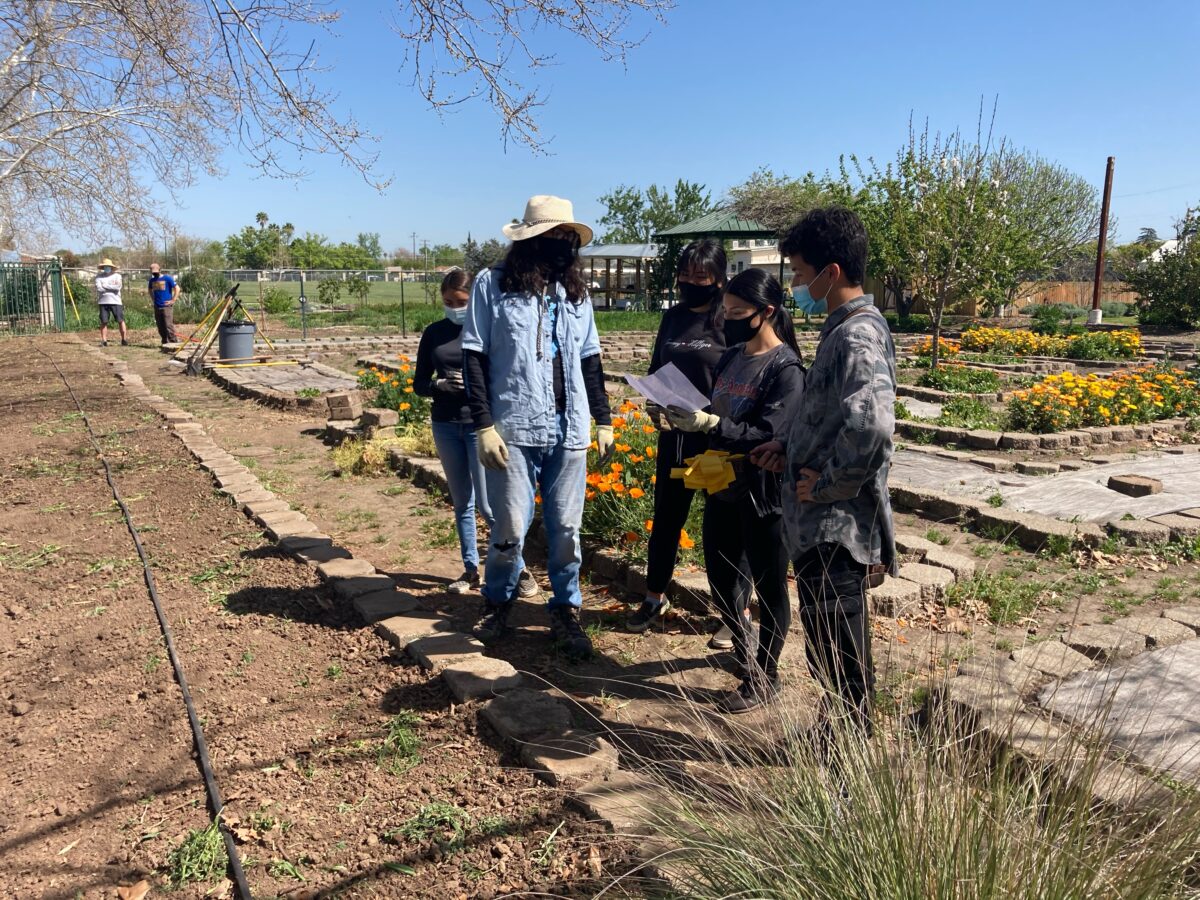 Summary of the Day
A little over a week after our first SLEWS Field Day at Grant Union High School we were back for our second day, which took place over the students’ spring break. Our first day had been spent clearing out the planting area and enriching the soil, so the site was ready for the next step of its native habitat transformation – installing the plants!

At our opening circle, each student shared which superpower they’d most like to have and introduced the group to a plant we’d be installing that day or one they’ve already seen in the GEO Garden. Then we headed out to the planting site to get started.

The first step was using rakes to level the ground and break up any large clumps of soil. Then students worked together to install the irrigation line. Once this was done, the students were challenged to set up the planting area based on the planting plan their teachers had provided. Roles were assigned – project manager, assistant project manager, etc. and students had long and lively discussions about the best way to lay out the plants. Once they finished, teachers provided feedback and students adjusted the plant layout to better follow the planting plan. Students made indentations at each planting site and filled them with water to saturate the soil before planting per the garden manager’s instructions.

We took a break for a burrito lunch to give the water time to sink in. After eating, students finished digging holes and planted all of the plants. Students installed an emitter at each plant to ensure it would receive the proper amount of water, and added spaghetti tubing where necessary to make sure the water would reach the plant. Finally, we put a layer of mulch around the plants to discourage weed growth and increase water retention. We finished just in time for a quick closing circle before sending students off to enjoy the rest of their spring break. I’m looking forward to our third and final field day later this year, when hopefully we can get more students involved with the project! 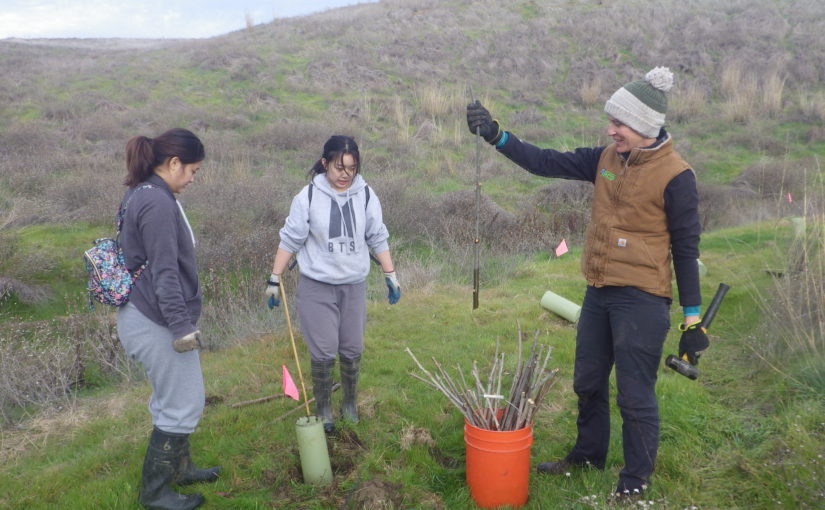 Summary of the Day
For our second Field Day at Yanci Ranch, Grant Union students arrived early and eager to plant! After breakfast and opening circle, we got to know one another better (and brushed up on names) with a game of “Where the Wind Blows”. After dividing into mentor groups, students learned the names, characteristics, and ecological functions of coyotebrush, sage, elderberry, wild rose, and buckwheat – five of the plants we would be planting that day.

After becoming familiar with the plants, mentor groups faced off to be the first to identify those five plants in a game of “Steal the Native Plant”. Then it was time to grab tools and head down to the planting area to learn the proper way to plant our hedgerow. Some students would be planting native trees and shrubs from containers, while others would be planting cuttings of cottonwood, red willow, and mule fat in areas that tend to have more water.

Mentor groups divided themselves down the line, working the same sections they installed emitters on back in December. By lunchtime, students had planted an impressive 179 containers and 30 cuttings!

After lunch, we took a walk to take a look at some of the earlier phases of restoration here at Yanci Ranch. Rominger Brothers Farms has been working with Yolo County Resource Conservation District for several years to increase biodiversity and create corridors of native habitat on this cattle ranch. Several SLEWS projects have taken place here, including one with Grant Union High School! Amy Williams of Yolo County RCD led us through several of these previous phases, giving students a view of what their site might look like after it’s had a few years to mature. Students were even recognizing some of the same plants they just planted, but much larger, of course!

We took a moment to reflect in a beautiful meadow as students spread out to create a postcard from the field. On one side, students drew a picture to represent their experience and on the other, wrote a postcard to commemorate the day. As we returned to our home base and circled up to close the day, students expressed gratitude for the experience and remarked on how being outside and contributing to restoration made their stresses melt away.